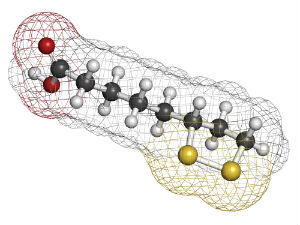 When it comes to health, there are some powerful molecules that remain relatively unknown by the general population. Alpha-lipoic acid is just one of these important molecules, acting as an antioxidant and playing an integral role in cellular energy metabolism. There are two forms of alpha-lipoic acid: r-lipoic acid and s-lipoic acid. R-lipoic acid is the biologically-active form the human body prefers. The Na refers to the sodium salt that stabilizes the R-lipoic acid. The sodium makes it less likely to bind, keeping each molecule separate and more readily available for the body.[1]

What Does R-lipoic Acid Do?

R-lipoic acid contributes to mitochondrial energy creation in cells. As part of the cellular energy process, it also has the ability to neutralize free radicals. Both mitochondrial function and cellular health are associated with the aging process, so it comes as no surprise that poor mitochondria and cellular function are also associated with accelerated aging. In addition to protecting against aging, lipoic acid also interacts with other antioxidants, such as vitamin C and glutathione, to protect cells.

Here are a few of the potential benefits of lipoic acid:

If you've ever engaged in strenuous exercise, you're probably familiar with the soreness that follows the next day. Muscles are sore and tender after a workout because exercise breaks down muscle tissue. Although that may not immediately sound desirable, it's necessary for the muscle to grow. The good news, however, is that studies have found that lipoic acid may make the post-exercise recovery period easier by soothing the body's responses that produce soreness.[3]

Antioxidants like lipoic acid are known to protect the brain from oxidative damage associated with aging and neurological disease. Lipoic acid has an added benefit in that it can cross the blood-brain barrier and neutralize free radicals, protecting the brain and nerve tissue. One study explored the effect of lipoic acid on a small group of seniors suffering from Alzheimer’s disease. They observed that those taking the lipoic acid and fish oil combination experienced a slower cognitive decline over the 12-month period of the study.[4]

Lipoic acid has a long history of use treating diabetic neuropathy, especially in Europe. A 2006 study found it reduced symptoms when compared to the control group who took placebo.[5]

The Best Sources of Lipoic Acid

Do you use alpha-lipoic acid? What changes have you noticed since you started taking it?