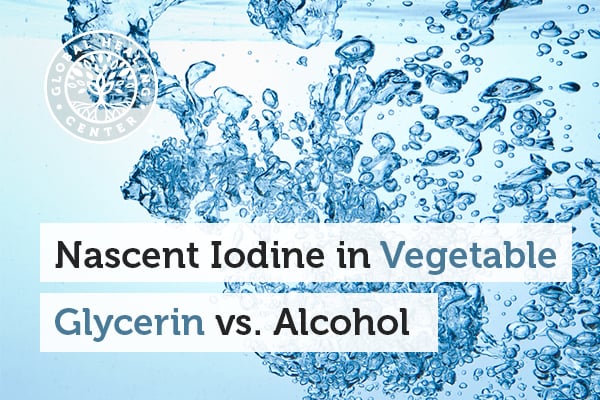 There's been much discussion lately regarding the best form of nascent iodine – glycerin based or alcohol based? Because it’s not practical or safe to simply consume pure iodine in its elemental form, it needs to be stabilized into an extraction medium.[1] The medium may either be alcohol or vegetable glycerin.

The alcohol used in alcohol based nascent iodine products is simply ethanol, or grain alcohol, the same alcohol found in alcoholic beverages. It needs to be remembered that alcohol is an intoxicant and may not be appropriate for everyone, especially children, recovering alcoholics or pets.[2] Also, it is important to note that most alcohol is produced from genetically modified corn.

Conversely, glycerin, also known as glycerine, glycerol, and glycerite, is commonly derived from animals. Safer, vegetable-based glycerin can be derived from palm, non-GMO soy, non-GMO corn, or other safe sources. It’s safe, gentle, and a very effective preservation medium that does not present any of the concerns associated with alcohol consumption. When using vegetable glycerin for nascent iodine production it should be certified organic or USP grade/kosher certified.

A Brief History of Glycerin

Glycerin was first produced in the late 1700’s. Made from the saponification of fats and oils, it’s an odorless, colorless, syrupy liquid with a sweet taste. Although it has an oily texture, it’s not an oil or sugar, but in fact a triatomic alcohol.[3] One of the first things to understand is that glycerin is a fantastic moisturizer and began to be used medically around 1844 for skin diseases. Beginning in the 1840's it was used as a meat preservative. By the 1850's it had gained recognition as one of the best general solvents and extraction mediums in existence. [4]

At a Glance: The Benefits of Vegetable Glycerin

Glycerin is a remarkable substance. It does not evaporate in air, it absorbs moisture when exposed. It does not spoil. It has an antiseptic effect on organic materials. For these reasons, it was used in the 1800's to prevent pills from drying and becoming hard. Glycerin does not irritate the skin; conversely, it moisturizes very effectively. When applied to burns, it soothes discomfort and penetrates to deliver moisture. It’s an excellent wound dressing and was used in the 1800’s to discourage gangrene. Glycerin is a terrific emollient and used in many bath and body products to soften the skin. When taken internally, it’s gentle and even comfortable enough to provide delivery of ulcer medications.[5]

Is Alcohol Toxic to the Body?

Alcohol provides no nutritional benefit whatsoever. In fact, research proves quite the opposite.

Vegetable glycerin is an extremely effective medium to hold iodine. One of the primary benefits of vegetable glycerin based nascent iodine is that it takes advantage of iodine's ability to hold an electromagnetic charge. Using a proprietary process, a mixture of glycerol-iodine is "blasted" with a pressure sensitive, high-energy, thermodynamic, electro-sound pulse - similar to a “sonic boom”. This breaks the diatomic bond of the iodine and each atom retains an electron, giving it an electromagnetic charge.

Nascent iodine is the form of iodine most easily used and absorbed by the human body and vegetable glycerin is the medium that encourages absorption the most. Using energy to break the diatomic form to create monatomic "nascent" iodine is a primary difference between nascent iodine and diatomic, or iodine/iodide products such as Lugol's.

The benefits of monatomic nascent iodine are well known. As far back as 1926, iodine in its atomic state was called "atomidine" and accepted to be exceedingly beneficial and safe.

"The lethal dose of Atomidine (1926 to 1935) in animals is very large, which accounts for the absence of untoward effects in clinical use. Due probably to its rapid absorption and its ready combination with harmless protein or other organic compounds in the body, iodism very rarely occurs even in sensitive persons." Schieffelin and Company, 1930's

Benefits of Using Glycerin Instead of Alcohol for Nascent Iodine Production

Unlike alcohol, which has a drying and puckering effect that negatively affects absorbability, glycerin is a humectant that moisturizes and hydrates to promote iodine absorption. Not only is vegetable glycerin a natural substance that’s recognized by the body, it triggers salivation to supply the enzymes necessary for absorption.

Glycerin and alcohol have different preservation mechanisms. Whereas glycerin gently encapsulates a substance in its molecular matrix to preserve the characteristics, alcohol has a harsh, denaturing action that alters cell structure and renders vitamins, enzymes, and other beneficial constituents inert.

Alcohol has a long history of use as a solvent, mostly because of its low cost. However, glycerin is a natural, non-toxic, food substance that extracts more constituents than grain alcohol.[11] Also, because it's one of the most iodine hungry compounds in existence, glycerin is the solvent of choice for those who demand the best form of nascent iodine.

Alcohol is a harsh and rigid solvent that disrupts cell membranes and DNA. Glycerin has unparalleled micro-encapsulating qualities that fully capture complete constituents and compounds in its matrix. This reduces ingredient inversion, evaporation, precipitation, and slows REDOX reactions.

Alcohol is an intoxicant and not appropriate for children. Children may also lack the enzymes necessary to convert alcohol to sugar. Functionally, glycerin is far more gentle and safe.

Vegetable glycerin has a pleasant, mildly sweet taste. Alcohol based iodine products burn like alcohol and are quite harsh. In addition to a horrible taste, the burning sensation affects absorption by constricting and dehydrating oral tissues!

Vegetable Glycerin is a superior choice for people who wish to maintain balanced blood sugar levels. The human body metabolizes alcohol into sugar very quickly, which can aggravate diabetic conditions and upset weight loss efforts. Conversely, glycerin converts to sugar very slowly and does not cause blood sugar spikes.

Alcohol based nascent iodine is prone to evaporation, sublimation, and oxidation; all of which affect product integrity and formula concentration. Studies have demonstrated that this effect can happen as early as six months after production. Vegetable glycerin does not evaporate and preserves stable nascent iodine that does not breakdown or change with time.

Alcohol based iodine products recommend adding the drops to water before ingesting. This can be dangerous if distilled water is not used because most water contains chlorine or fluoride – halogens that fight iodine for absorption by the thyroid. Glycerin based nascent iodine contains only USP glycerin and USP elemental iodine that have been produced using Good Manufacturing Practices and can be directly taken orally.

Glycerin is produced according to stringent standards to ensure its status as a safe and effective, high-quality preservative. [3] It gently suspends the iodine and presents an accurate and complete imprint. Alcohol based iodine products contain ethanol, or grain alcohol - the same alcohol in alcoholic beverages. Alcohol is toxic to the liver and can be problematic for those who are ill  as well as children. Vegetable glycerin based nascent iodine is safe for everyone.

It’s known that thyroid concerns from inadequate iodine don't only affect humans. Dogs, cats, and other pets are known to be at risk, too! Vegetable glycerin based nascent iodine can safely be given to pets. Alcohol cannot!

Glycerin is a moisturizing humectant that does not irritate. ?Its use for skin disorders extends as far back as the 1800's when it was used to keep wounds hydrated but free of air contact. Prior to winter expeditions, Russians were known to spread a thin layer of glycerin on their face to protect their skin against the cold since it would neither evaporate nor congeal. Glycerin is in fact so gentle and hydrating that it’s even been used during eye surgery to keep the eyes moisturized.

The Bottom Line: There’s No Advantage to Alcohol

Alcohol doesn't taste good, it's harmful to the liver, alcohol is toxic to the body, it's an endocrine disruptor, and it's not appropriate for children or pets. Glycerin is a better solvent and a better preservative that is completely safe. There is no question - glycerin offers the best delivery method for the high quality nascent iodine your body needs!

Vegetable Glycerin Based Iodine is the Best