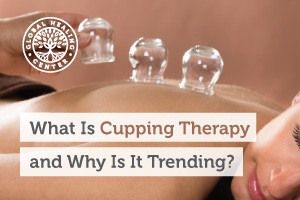 Cupping therapy is an ancient practice that is now considered part of the complementary and alternative (CAM) medicine category, along with acupuncture and aromatherapy. During a cupping therapy session, a massage or acupuncture therapist applies suction cups to various areas of the body. The cup may be made of bamboo, plastic, or glass; traditionally, horns and shells have also been used.[1] While the cup is in place, suction stimulates blood flow and even causes blood to leak into the skin and produce a hickey-like red or purple bruise. Reported benefits include joint and muscle pain relief, increased blood flow, and reduced inflammation.

Although the practice rose to mainstream, international attention during the 2016 Summer Olympics when athletes were spotted sporting large circular bruises on their arms, backs, and legs, the practice actually began in ancient Egypt.[2] From there, it spread to Greece, Europe, the Middle East, and Eastern Asia.[1] Because cupping therapy has a long history in several cultures, it is known by other names including needlehorn, sucking method, fire cupping, and horning. The term "cupping" usually refers to dry cupping. This is different from wet cupping which is less common and involves lacerating the skin with a scalpel to allow bleeding.

The Health Benefits of Cupping Therapy

According to advocates, cupping increases blood flow to the areas where the cups are placed, making it an effective way to relieve muscle pain and accelerate recovery. Some proponents insist that cupping helps the body repair muscle damage by pulling nutrients into the affected areas, but there's no hard, scientific data to support the idea.

Although much of the conversation supporting cupping therapy is anecdotal, a few rigorous studies exist and the results suggest that cupping offers a way to help manage pain.[3] In fact, in some trials, cupping therapy relieved pain just as well as conventional treatments for pain management.[4] One of the most appealing benefits of employing alternative methods for pain management is that there are no adverse side-effects, unlike pharmaceutical drugs. The therapeutic benefits of cupping might be the placebo effect, but even if the relief you feel stems from the expectation of relief, it's still, arguably, a better option.[5]

As an interesting sidenote, it seems that shingles, also known as herpes zoster, benefits from cupping therapy when used in conjunction with other CAM therapies, but more research is needed to pinpoint the mode of action.[3]

Of course, there are other methods for relieving discomfort that have stronger scientific evidence. An ice compress is an excellent way to relieve sore muscles because the cold helps control inflammation in the affected area.[6] Ointments that contain menthol are especially helpful for soothing stiff, sore muscles.[7]