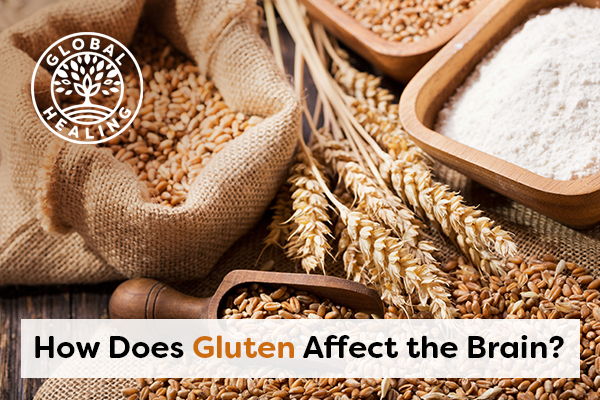 The widespread occurrence of gluten sensitivity, wheat allergies and celiac disease have been well documented. Many of the related concerns such as gastrointestinal discomfort (IBS), rashes, concerns with nutrient absorption and bone loss have been reported and observed. Fortunately for many, following a gluten-free diet can relieve these indications and revitalize health. But, aside from digestive complaints, there may be another reason to avoid gluten – its effect on the brain.

Recent research on the concerns related to gluten have focused on the impact it has on the brain. Scientists have discovered a very close connection between the brain and the enteric nervous system (the ‘brain’ of the digestive tract). Based on this understanding, researchers have begun to look at gluten’s effect on immune response and nutrient absorption and how it affects the brain. The results so far have been terrifying.

Frequent headaches and migraines can be as irritating as they are painful. While a typical response may be to take a couple of aspirin and try to get on with the day, the better response might be to discover the cause. Headaches may be caused by something eaten – and that something may be gluten.

A recent study has suggested a link between gluten sensitivity and celiac disease with IBS and migraines. The research has indicated that those suffering from celiac disease and IBS suffer more frequent headaches and migraines than those who do not. [1] Further research has suggested that the body’s response initiates in the digestive tract and creates an over-sensitive nervous response, leading to debilitating migraines. [2]

Another study evaluated children with celiac disease who suffered frequent headaches. Children were placed on a gluten free diet to determine if this would alleviate the headaches... and in an overwhelming majority of the cases it did. [3]

Of course, if gluten is only causing you headaches, consider yourself lucky, or maybe not...

Should Food Cause Brain Abnormalities?

In some cases, the concern is simply a loss of brain matter. While this is certainly not good and can lead to more severe concerns, the adoption of a gluten-free diet has been shown to help. Other cases have been noted that cannot be so easily ‘fixed.’

Researchers at John Hopkins University School of Medicine explored the impact of gastrointestinal redness (such as created by celiac disease) in schizophrenia. They looked at factors such as immune system activation and the increased ability for toxins and pathogens to enter the blood stream. In doing so, they found that immune factors as initiated in the gut suggests a link to mental illness. [6] While more research needs to be done on this subject, the fact that top researchers have begun to explore the relation between intestinal concerns caused by gluten and mental illness should give anyone concerned for their health and well-being pause.

Regardless, the evidence continues to mount in the case against gluten.

Just as with the strokes, blood clotting in the brain has been reported with the only underlying cause that of celiac disease. [8] While this has so far only been reported in individuals with celiac disease, there may be reason for those suffering from any type of gluten sensitivity to be aware.

In addition to headaches, brain abnormalities and blood clotting that may lead to stroke, gluten has been directly linked to epileptic seizures, and white (brain) matter lesions indicating ALS (Lou Gehrig’s disease). These links are cause immediate for concern. The good news is there is hope.

Studies have found gluten sensitivity caused changes in the brain. Researchers saw calcification on certain sections of the brain that caused epilectic seizures. In each of these cases the seizures stopped once the patient began a gluten-free diet. [9] [10]

The same result occurred in an individual suffering from lesions on the brain similar to those seen in ALS. Upon examination of the patient, celiac disease was discovered. Once he was placed on a gluten free diet the MR imaging (MRI) showed a reduction in the lesions and an overall improvement in his condition. [11]

Even though the research on the impact of gluten on the brain is relevantly new, the message is clear – gluten has much more far reaching impacts on our health than previously thought. The research suggests a significant component of the concern derives from immune response and irritation caused by the body’s response to gluten.