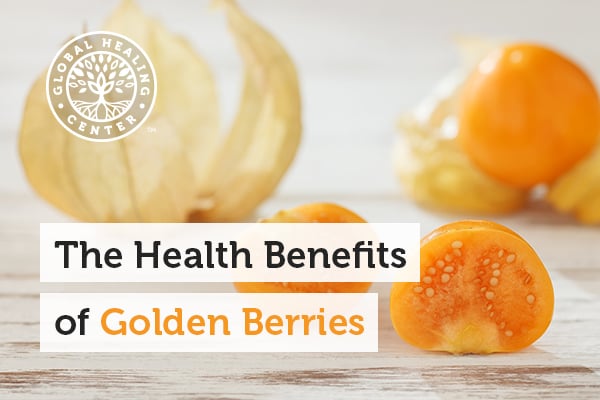 Golden berries, also known as Physalis peruviana, is South American fruit that's highly concentrated with nutrients and bioactive compounds. In Colombia, the delicious golden berry is an important international export and prominent local food. [1] The plant has been used for centuries in traditional medicine, often against jaundice. [2] While the evidence for golden berry application for jaundice remains anecdotal, research has found other positive health benefits associated with the fruit.

Compared to other small berries, golden berries are higher in protein and vitamin A and they're much lower in sugar. They're also loaded with antioxidants. Phytochemical screening has revealed an abundance of flavonoids as well. [5] Flavonoids are specific antioxidants that promote cardiovascular health and other benefits.

The Health Benefits of Golden Berries

Plants used in traditional medicine have drawn the attention of researchers who seek to develop new therapeutic agents for a wide range of diseases. In folk medicine, golden berries have many applications and many cultures regard golden berries as a mild diuretic that promotes proper fluid balance. [6] Other ways that golden berries encourage good health include...

Starch and sugar are broken down in the body through an enzymatic reaction, a process that can increase blood sugar levels. Studies suggest that golden berries may be helpful for inhibiting the enzyme responsible for this reaction and preventing the breakdown of starchy carbohydrates; thus controlling the impact carbohydrates have on blood sugar. [7]

Illness and irritation can cause redness and swelling in the body; it's indicative of many diseases. [8] Research conducted by the National University of Colombia confirms that golden berries offer potent activity against systemic redness and swelling. Golden berries present an immunomodulatory effect which directly (and indirectly) blocks the affected mediators. [9] In layman’s terms, golden berries fight redness in the body by reducing the impact of proteins that cause the redness. [10]

In late 2013, Egypt's National Research Center's Department of Medicinal and Aromatic Plants reported that golden berries may offer potent liver and kidney benefits, possibly protecting against the “scarring” of liver tissue. [11] Liver health is especially important, as it's the body's main detoxifying organ. Its anti-redness and antioxidant compounds may be effective for protecting other organs, including the lungs. In fact, preliminary research is even examining the potential for a primary compound in golden berries, 4 beta-Hydroxywithanolide, as a potential therapy for lung cancer.

Have You Tried Golden Berries?

There's no question that research into golden berries has uncovered much to think about concerning their positive effects on human health. However, one of the best reasons to snack on golden berries is because, like goji berries and chia seeds, they're a delicious and healthy snack! They're loaded with nutrients and antioxidants and go great on a salad, in trail mix, or even by themselves. Their sweet, tart taste is unique; they're a perfect example of a fruit that's even better than candy!