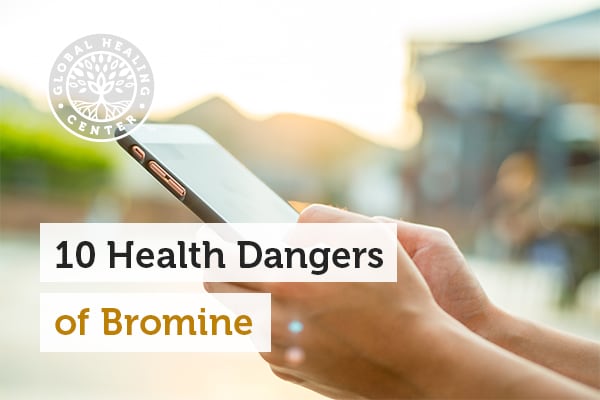 Bromine is a chemical compound frequently used in flame retardants, baking ingredients, cell phones, plastic, dye, soda, and prescription drugs. Despite the warnings from the Centers for Disease Control about the serious, long-term health effects from constant exposure, use of the chemical shows no signs of slowing down. [1] Why should you care? Because research has identified the following 10 dangers of bromine as the most damaging to human health.

Exposure to bromine severely impacts the thyroid gland and causes hormonal issues. Bromine competes with iodine, an essential nutrient that supports the health of the thyroid. Bromine and iodine are absorbed in similar fashion and animal research has found that bromine exposure limits availability of iodine to the thyroid and interferes with hormone production. [2] [3] [4] [5] [6] The flame retardant PCBE, for example, has specifically been fingered as a thyroid and endocrine disruptor. [7] This is a HUGE concern – an impaired thyroid can lead to hypothyroidism, goiter, and hormonal imbalance.

Iodine plays an integral role in conception and gestation. When bromine replaces iodine during pregnancy, expectant mothers may be at an increased risk for delivering preterm babies. Avoiding bromine can be tricky as it's often used during water purification. One study found that mothers exposed to higher levels of bromine showed an increased risk of preterm delivery. [8] An Australian study even reported a link between bromide exposure and birth defects. [9]

Children exposed to high levels of brominated compounds (PBDEs) in flame retardants are known to suffer development issues. In one study, researchers tracked children born with high levels of PBDEs for six years. At all stages, their mental and physical development lagged behind children with lower, "acceptable" levels of PBDEs. [10] Based on this fact alone, it's shocking that any bromine exposure could be considered acceptable.

Mental dysfunction related to the overexposure to bromine is so common it even has a name – bromism. [11] In one specific case of bromism, a patient consumed vast amounts of soda that contained brominated vegetable oil. The patient experienced concerns including fatigue, headache, memory concerns, and loss of muscle control. [12] Next time you reach for a soda, check the label!

Psychosis, schizophrenia, and other mental health consequences, as a result of bromine exposure, has been known for decades. [13] Nearly 30 years ago, researchers speculated that some mental illnesses, like schizophrenia, may be misdiagnosed. Why? Because in some cases, reducing bromine levels decreased or eliminated schizophrenia symptoms. Thus, many experts believe some mental conditions may simply be a symptom of an underlying nutritional concern. [14]

When bromine comes in direct contact with the skin, it can irritate or burn. Exposure to bromine has also been linked to the development of cherry angiomas and lesions. [15] [16] [17] This effect has been known for almost a century, with the term "bromine acne" noted in a text from 1926. These pus-filled eruptions and lesions were observed in individuals who took bromine for nerve conditions. [18]

Recent research has determined that potassium bromate, a common baking ingredient, causes oxidative damage to DNA. [19] To date, the research has involved animals; however, the human population consumes the most of this compound on a daily basis and many people are extremely concerned of its negative health implications! [20]

The International Agency for the Research on Cancer has identified potassium bromate (the ingredient used in bread and baking) as a known carcinogen. Although tests have only been performed on animals, the Agency states it may also behave as a carcinogen in humans. [21]

9. Toxic to the Kidneys

Potassium bromate is a known kidney toxin and has killed human embryonic kidney cells in lab tests. [22] Even the CDC acknowledges bromine may cause kidney damage. [23] Bottom line, if you prefer healthy kidneys, avoid bromine!

Ears require a balance of potassium and sodium, two minerals that are helpful for promoting proper hearing. When tested on animals, potassium bromate created chemical imbalances within the inner ear. Researchers believe that an imbalance of nutrients may lead to hearing loss in humans. [24]

Protecting Yourself from Bromine

Bromine's interferes with proper thyroid function, hormone synthesis, and kidney health. And those are just a few of the many concerns associated with excessive bromine intake. Reducing your exposure to bromine and related chemicals, such as potassium bromate, is a key step to protecting your health. The next step is to ensure you have adequate iodine levels, which can be accomplished by eating iodine-rich foods or supplementing with a high-quality iodine supplement.