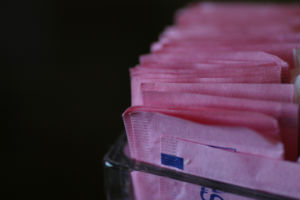 Artificial sweeteners are everywhere, and if you’re like me, you avoid them at all costs. Things like aspartame, sucralose, and saccharin can be found in a variety of processed diet foods; however, even some foods you wouldn’t expect contain these chemicals. Whether you’re knowingly poisoning yourself with these toxins or not, you must know that their presence in your diet, regardless of the amount, have no purpose for your body. Not eliminating them is sometimes the only obstacle many people have toward achieving good health.

Avoiding artificial sweeteners should already be a no-brainer. Here are the top three sweeteners you should look out for:

Saccharin was the first artificial sweetener and is still a popular sugar substitute used by many people across the world. Fortunately, it’s not as popular in diet foods as it used to be. You will typically find saccharin in pink packets of artificial sweetener, like Sweet‘N Low. Saccharin can cause allergic reactions in some people, including headaches, breathing difficulties, skin eruptions, and diarrhea. [1] There are also studies tying saccharin to cancer.

Sucralose, or commonly known by its trade name “Splenda,” is another commonly-used artificial sweetener. This sweetener, along with aspartame, is often used in diet sodas and other weight loss and diabetic-friendly foods. While it is true that Sucralose starts off with natural sugar as the starting material, it is chlorinated and goes through a very unnatural process. Supposedly, Sucralose is not digested and travels through the GI tract unchanged; however, a recent analysis shows the exact opposite. [2] There is some research also showing that Sucralose affects glucose control in diabetics and prediabetics, something that nonnutritive sweeteners are designed to avoid. [3] Considering that Sucralose was discovered while testing for a new insecticide (at least that’s what’s been widely reported), why would we want to ingest this at any amount?

Aspartate and glutamate are found in aspartame and behave as neurotransmitters in the brain. Having an excess of these neurotransmitters kills certain neurons by allowing the inundation of calcium. This influx provokes excessive amounts of free radicals which kill the cells. [4] The sweetener also contains methanol, which is subsequently metabolized into formaldehyde. There’s a host of other issues with aspartame, and I firmly believe this to be one of the worst artificial sweeteners on the market.

I always suggest that everyone, including healthy individuals, remove added sugars from their diet, including artificial sweeteners. Organic coconut sugar or, better yet, raw organic honey are much better alternatives to satisfy sweet cravings within the confines of a healthy diet.