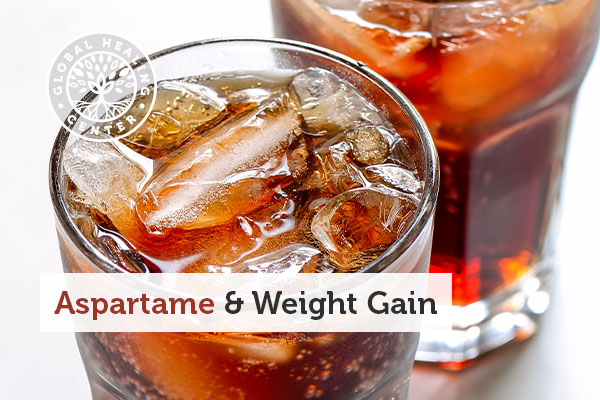 You want to lose weight, so you start trying to cut calories. The most obvious starting place seems to be switching from high-calorie foods with sugar to foods with zero calorie sweeteners, like aspartame. Better known by brand names, such as Equal, NutraSweet, and Spoonful, aspartame seems like a no-brainer. Fewer calories equals weight loss, right?

In fact, study after study has shown just the opposite. Aspartame and all other artificial sweeteners lead to weight gain, not weight loss. So, not only may aspartame be the most toxic additive to foods, instead of helping you lose weight, it actually makes it even tougher to lose it!

Dr. Qing Yang, of the Department of Molecular, Cellular and Developmental Biology at Yale University, explains. [1] He suggests that multiple factors are at play:

It Isn't All About Calories

Studies have shown that not only does aspartame cause weight gain, it causes greater weight gain than a diet with the same calorie intake, but no aspartame. [2] So it's becoming more and more clear that there's a lot more to weight reduction than counting calories.

Aspartame contains the chemicals phenylalanine and aspartate. Both of these substances increase fat storage. They interfere with insulin and leptin, which control how fat is handled, whether it's stored, how it's stored, where it's stored, and how it's used. [3] [4] [5] Fat metabolism is deranged by aspartame, with the inevitable result of causing people to pack on the pounds when they're trying to do exactly the opposite.

Aspartame: Fat-Free or a Fat Pack of Lies?

The fact is that aspartame is not the shortcut to weight loss that marketers want you to believe. The only true thing about the advertising is that it doesn't have any calories. But, as you've seen here, weight loss is about more than calories.

In short, aspartame makes you fat by:

Of course, I don't advise eating sugar. It causes more than enough concerns. However, if you cannot control your sweet tooth, sugar is less harmful than aspartame — or any other artificial sweetener – and probably won't cause as much weight gain. Isn't it amazing that a product sold to help you lose weight actually has the opposite effect? Worse than that, it actually makes you crave more of it, so you'll end up getting even fatter.

What a fat pack of lies!