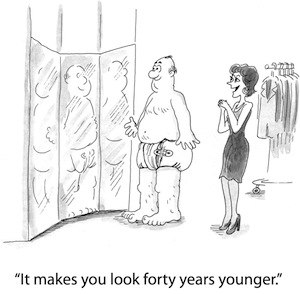 Menopause isn't a subject most guys are interested in. Hormonal imbalances, hot flashes, night sweats – that's all woman stuff... right? Wrong! Sorry men, there is more than a mountain of evidence to show that the phase of life sometimes dubbed "puberty in reverse" affects both women AND men. Many men are finding out the hard way that a general decline in sexual, physical, and mental activity is more of a reality than they anticipated. Guys, take a knee – it's time to set the record straight and have "the talk" about male menopause.

What is Male Menopause?

Male menopause is the age-related decline of hormone production and activity. [1] This brings on a spectrum of physical changes – decline in muscle mass, loss of libido, and decreased growth hormone and testosterone secretion. Testosterone deficiency can be a cause of erectile dysfunction. Low testosterone is also significantly correlated with a depressed mood and an accumulation of central and upper body fat. [2] And that's all described as a "normal" part of aging. For men whose health isn't the best or who suffer from chronic illnesses, the effects can be even worse. The combination of age, health status, and lifestyle factors all impact the onset and severity of male menopause symptoms. [3]

The History of Male Menopause

It's not, nor has it ever been, a secret that middle-aged women endure an inevitable part of aging known as menopause... and that's typically where the conversation ends. Now, however, male menopause, also known as "manopause", has become mainstream news due to an explosion of research into the subject. But, it's not new news.

Writers in the nineteenth and early twentieth century wrote frequently about menopause in an effort to dispel its mysterious aura. They encouraged middle-aged women and their husbands to view it as a phase that would open the door to a more fulfilling stage of life. These same writers often compared female menopause to similar issues that men experience and attempted to portray "male menopause" in an optimistic light. [4] Call me crazy, but it doesn't sound like a chat that would appeal to most men.

Turns out, it didn't. Although male menopause is referenced in medical texts from the late 1930's to 1950's, it virtually disappeared from the medical field’s radar until the 1990's when the subject was revived. [5]

When Does Male Menopause Happen?

Unlike female menopause which may be marked by "firm" stop and start times, male menopause is much more of a gradual process that can go on for years, even decades. [6] Although it's rare, andropause can affect some men as early as their 20's. However, it's much more common in men age 30-75 for whom testosterone levels drop up to 50%. In fact, at least half of men older than 50 suffer low levels of testosterone.

Physical changes from andropause aren't limited to embarrassing sexual concerns. In fact, that might be the least of it. Coronary heart disease, for example, has been linked to lower testosterone levels. [7] And, although there is a significant need for further research, the University of Texas Medical Branch School of Nursing warns that male menopause is one of a few conditions that may increase a man’s risk for developing breast cancer. Yes, breast cancer – another condition thought to only affect women. Guys, it's time to wake up! [8]

Some research shows that testosterone supplementation can increase muscle mass, strength, and lower cholesterol levels. Sounds great, right? Not so fast. Testosterone supplements have been linked to serious health concerns, including heart damage. [9] In my opinion, they're completely not worth the risk.

Honestly, you don't need them anyway. An antioxidant-rich diet, exercise, and plenty of sleep are the most powerful ways to decrease the rate at which the body ages. The more active a man is into old age, the less of an impact male menopause is likely to have on his quality of life. Concerns like decreased energy, low libido, and cognitive dysfunction can be prevented at some level by participating in a healthy lifestyle. [10] Herbs like ashwagandha and tribulus terrestris may also provide additional nutritional support.