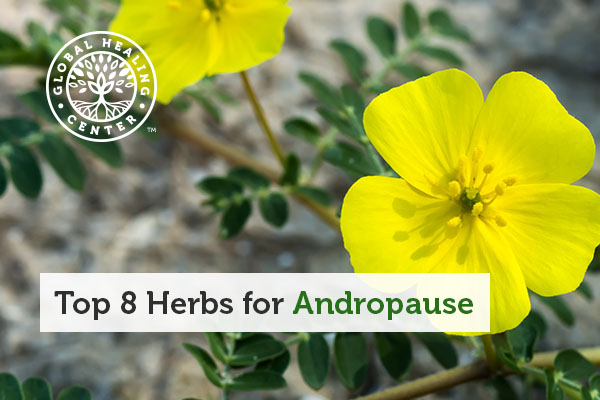 Andropause, or male menopause, is a condition associated with a drop in sexual activity, testosterone levels, and a diminished frequency of normal erections. It's an age-related concern and many men are in full swing by middle age. Thankfully, there are natural solutions for combatting the effects of andropause.

Herbs that have been used for centuries have demonstrated their potent abilities and received validation from modern science. Here are the top 8 herbs for promoting vitality during andropause.

A natural aphrodisiac, Tribulus has been used in various countries for centuries to stimulate libido and promote normal testosterone levels.[1] The plant's active compound, protodioscin, is a precursor to testosterone. As a blood vessel dilator, protodioscin may allow more blood to reach the penis, resulting in a normal, full erection. Males given Tribulus terrestris may experience an increased erection frequency.[2]

Suma root comes from the suma ground vine (Hebanthe eriantha), typically found in the rain forests of South America. It's been widely used as an herbal tonic for hormone activity and some evidence suggests it's effective for improving libido and sexual response. Ecdysterone, a bioactive compound in suma, may promote normal hormone levels in men, particularly testosterone, which stimulates male sexual performance.[3] Men suffering from andropause or general sexual dysfunction are among the most popular consumers of suma root.

Also known as "Indian ginseng," Ashwagandha has been used for over 3000 years to remedy various sexual issues. Especially when combined with Tribulus terrestris, ashwagandha may promote fertility in men. Researchers believe that Ashwagandha helps alleviate stress, which is essential for promoting sperm quality.[4] The herb may also be helpful for encouraging normal energy levels, a common issue that plagues many infertile, impotent, and sexually inactive men.[5]

Native to Peru, maca (also known as Peruvian ginseng) has been a favorite aphrodisiac and sexual endurance enhancer for thousands of years. Research has consistently shown maca to produce a significant erectile response.[6] Positive effects on ejaculation rates sperm quality have also been reported.[7, 8]

Another herb with powerful aphrodisiac properties, tongkat ali (Eurycoma longifolia) has been shown to stimulate libido, semen quality, and muscle growth.[10, 11, 12] These effects are attributed to tongkat ali's positive effects on testosterone levels. Middle-aged males experiencing menopause may see changes in their sexual health while supplementing with this Malaysian herb![13]

Similar to Tribulus terrestris, Catuaba bark promotes a strong and longer-lasting erection by increasing blood flow to the penis.[14] Catuaba may also increase the brain's sensitivity to dopamine, a neurotransmitter that enhances the pleasurable effects experienced during sex.[15]

Studies have shown that Muira puama (Ptychopetalum olacoides), an herb native to Brazil, may promote blood flow to support the chances of having a normal erection.[16] Men who are experiencing andropause often seek out Muira puama for this reason, and its ability to increase sexual desire and satisfaction.

Getting enough exercise and sleep are also integral for battling the early onset of andropause symptoms.