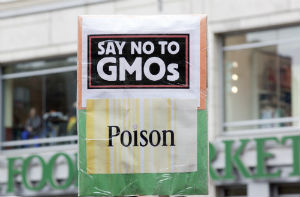 The topic of GMO labeling is hot right now and both sides are passionate. Should foods in the United States require GMO labeling, following suit of many other countries throughout the world? If there's nothing to hide, then why not label foods? The argument is that GMO foods are no better or worse for health than non-GMOs, and that labeling may confuse consumers and drive down profit for numerous food manufacturers. Now, in the New England Journal of Medicine (NEJM) is coming to the aid of labeling proponents, calling for the labeling of GMO foods. This bold step by a leading and respected medical journal may be the tipping point toward helping us know exactly what's in our food.

Scientific consensus is that GMO foods are harmless in any amount, and the labeling of foods containing GM ingredients is worthless and cumbersome to food companies. This simply isn't true, because there are numerous studies indicating GM food to be dangerous, or, at very minimum, irritating, to human and animal health. The NEJM says that GMO labeling "is essential for tracking emergence of novel food allergies and assessing effects of chemical herbicides applied to GM crops." [1] It calls for the respect of consumers who want labeling of foods containing GM ingredients. It's safe to say that in not doing so, consumers become distrustful of brands who refuse to label or lobby against labeling... and there are many. An estimated $100 million has been spent by the food industry in lobbying for less transparency in just one year. [2] So, if it's the money companies think they'll miss out on if they do label, they're likely to also miss it by not labeling.

But it isn't just about the genetically altered material that's contained within GM foods. The NEJM further states: "And the argument that there is nothing new about genetic rearrangement misses the point that GM crops are now the agricultural products most heavily treated with herbicides and that two of these herbicides may pose risks of cancer." Even the Environmental Protection Agency (EPA) is delaying a permit for Enlist Duo, a combination herbicide that is said to fight herbicide resistance. It has, however, been approved for use in a number of states. [3] It's a good thing, too, considering that all chemical herbicides present a real threat to human health. Glyphosate, or Roundup, is a common herbicide that is a probable human carcinogen, so one can only imagine what Enlist Duo – an herbicide that is more powerful than glyphosate – poses. To give you a clue as to how pervasive glyphosate is, research is showing that the herbicide is being found in human breast milk. [4]

Vote With Your Wallet

The best way you can let the food industry know you want GMO labeling and/or complete absence of GMOs from the food supply is to purchase organic. Any processed food you buy should be certified organic by the USDA, because these will not contain GMOs, pesticides, or any chemical ingredient of any kind. The more money that goes toward organic food, the more the industry takes notice. Most produce is not GM – yet. Still, conventional corn and soy are commonly GMO, so if you consume these foods, make sure they're organic.