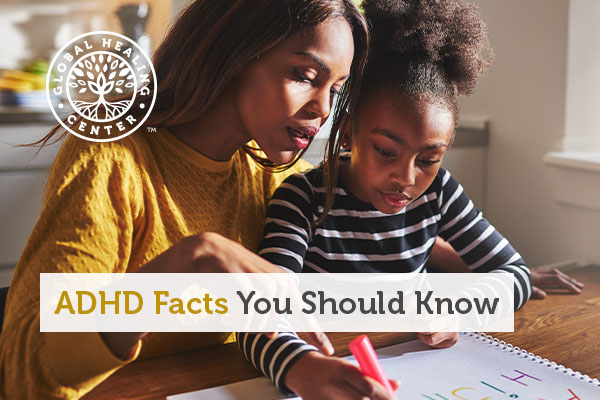 Kids (and adults) with attention deficit hyperactivity disorder (ADHD) have difficulties staying on task or finishing things, and while there are other concerns associated with it, these two symptoms alone can make life tough. There are facts you should know about ADHD and here are the four most disturbing.

ADHD Facts You Should Know About

1. ADHD Can Result from Trauma

People who have ADHD likely wonder, just what caused this? Well, a recent report suggested it could be environmental and that an ADHD diagnosis could be connected to childhood trauma. [1] For example, things like the death of a parent or domestic violence are termed ‘adverse childhood events (ACEs).’ The more ACEs in a child’s life, the more likely it is that child has (or will be diagnosed with) ADHD.

2. ADHD Can Cause Premature Death

Recent evidence suggests that the implications of an ADHD diagnosis can be far more serious than simply not completing tasks. In a multi-decade study following almost 2 million people, those with ADHD (about 32,000) were twice as likely to die earlier. [2] If that wasn’t bad enough, those deaths were often from unnatural causes — usually accidents. The risk of dying also went up based on a person’s age at diagnosis, and women and girls with ADHD were at a higher risk of early deaths than men and boys.

3. ADHD Could Be Something We Give Ourselves

There's a lot of evidence to suggest that a major factor for ADHD could be toxin exposure. Tobacco use, especially during pregnancy, or even being around cigarette smoke, can put your child at a greater risk for ADHD. [3] Fluoridated water could be tied to ADHD; in one study, scientists “found that states with a higher portion of artificially fluoridated water had a higher prevalence of ADHD.” [4] It's even been found that pesticides have a huge impact on ADHD. [5]

4. ADHD is Being Treated with Dangerous Drugs and Little Else

This is probably the worst... only about a quarter of U.S. children with ADHD are treated with behavioral therapy. [6] The rest rely solely on dangerous stimulants. And some think that the over reliance on drugs has less to do with medicine and more to do with big business. [7] Pharmaceutical companies really push these medications – often with extreme marketing tactics. This leads many to believe that when it comes to ADHD, our society is over medicated. Take into account that safety testing is pretty spotty — and, well, they could be onto something. [8]

But with all the disturbing facts out there surrounding ADHD, keep in mind that you might not even have it. There are a lot of conditions that can mimic ADHD — thyroid disorders or certain allergies, for example. But if you are completely certain it’s ADHD, there is research out there that suggests ADHD symptoms can be avoided through exercise. [9] Another report suggests living at higher altitudes leads to fewer ADHD cases. [10] Still, many children just “outgrow” ADHD symptoms, but there are many adults that still experience difficulties. [11]