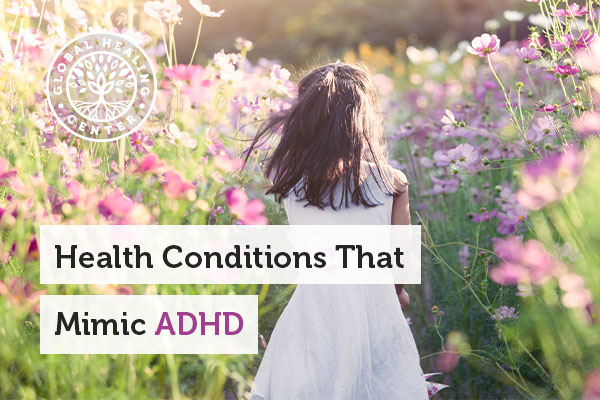 ADHD, or attention deficit hyperactive disorder, is diagnosed through mere observation of symptoms and not by any sort of scientific testing. There are no brain scans, blood tests, or biological readings to determine the presence of ADHD, just a myriad of behavioral and psychological symptoms. [1] Although many of the symptoms arise from an underlying cause, most doctors who diagnose children and adults with ADHD tend to overlook the underlying health factors in lieu of prescribing an ADHD medication. Whether concentration issues are the result of an allergy, lack of physical or mental stimulation, or is the result of nutrient malabsorption, misdiagnosis is bound to contribute to the sharp increase in ADHD diagnoses.

There are many biological, physiological, emotional, and medical conditions that may cause symptoms similar to those ascribed to ADHD. Here are just a few of the issues that might be influencing ADHD-like behavior.

Allergic reactions to synthetic dyes, preservatives, and other food chemicals can lead to symptoms associated with ADHD. [3] [4] One of the first steps to take if you're experiencing concentration or focus concerns is to avoid synthetic, processed, and non-organic food whenever possible.

There are many reasons why a child (or even an adult) may have trouble learning. Perhaps they learn at a slower rate. On the other hand, maybe they can pick up new information faster than those around them, resulting in extra downtime for daydreaming and restlessness. Whatever the cause, undiagnosed issues can result in an ADHD diagnosis. Perhaps all that's required to improve symptoms is a change of environment or teaching method.

Both the underproduction and overproduction of thyroid hormones can cause energy imbalances, mood disorders, and concentration issues. Anyone who is currently experiencing such concerns should have their thyroid evaluated before diving into traditional ADHD therapies. [5]

If a child has trouble seeing the board or hearing the teacher, this could affect how they perform in the classroom. This can affect adults as well, and many older adults are reluctant to tell their doctor about hearing or eyesight issues. Remedying poor eyesight or hearing may be helpful for avoiding an ADHD diagnosis.

People with abnormal levels of lead in their body are more likely to suffer from lower IQ, attention deficits, and negative work and school performance. Studies indicate that lead may be one of the leading culprits for increasing hyperactivity in children. [6]

Certain genetic diseases, like diabetes and heart disease, may also increase ADHD symptoms. People who have been diagnosed with ADHD should take inventory to determine if they're instead suffering from any one of the following conditions.

People who have a family history of diabetes should make sure they are keeping their blood sugar in check. High blood sugar, whether genetic or not, could present symptoms related to ADHD, including anxiety, poor focus, and aggression. [7]

Any sort of heart abnormality can affect blood, oxygen, and nutrient flow to the brain. Adults and children alike should look into their heart health if on the verge of being diagnosed with ADHD, especially if heart disease runs in the family.

While anemia isn’t always inherited, the condition, marked by a lack of red blood cells, is often a result of genetics. Anemia can cause a decreased level of oxygen to the brain, possibly leading to brain dysfunction.

Many health experts believe that 85% of children with bipolar disorder meet the criteria set for ADHD. [8] For children suffering from bipolar, mood swings can occur throughout the day, and many doctors, parents, and teachers misjudge these occurrences as ADHD.

Other Factors That Mimic ADHD

The following rare and lesser-known conditions are also known to affect mood, behavior, and mental function...

The spine is connected directly to the brain, and a misalignment can affect nerves and influence symptoms linked to ADHD. Exploring this with a trained chiropractor may be helpful for individuals suffering from ADHD-related symptoms. [9]

Gasoline fumes, pesticides, and lead are just a few of the toxins that permeate every day life. At times, you can become bogged down with toxins that manifest certain symptoms and conditions, including those associated with ADHD. [10] [11] When the liver isn't functioning as it should, it may prompt a lack of focus, concentration issues, and irritability.

Certain metabolic disorders that interfere with the body's ability to metabolize, or break down and absorb, certain nutrients may lead to the mental degeneration. [12] A brain that can't properly utilize glucose, for example, may experience difficulty processing and retaining information, a marked sign of attention deficit disorder.

Sleeping habits that are less than ideal can increase the chances of an individual being diagnosed as having ADD or ADHD. Not getting enough sleep or getting too much sleep can make you groggy and restless, both of which interfere with concentration.

A viral or bacterial infection could lead to temporary changes in behavior, and not for the better. [13] People with suppressed immune systems are the most susceptible. Even minor infections can affect behavior, mood, and mental clarity.

Caffeine and sugar are two of the worst offenders when it comes to maintaining mental health and clarity. Both behave like drugs and have addictive qualities. Sugar and caffeine stress the adrenals, lead to energy crashes, cause nervous issues and agitation, and even contribute to decreased memory and focus. Not receiving adequate vitamins and minerals can also interfere with brain metabolism, especially B vitamins. Every diet should include a balance of protein, fiber, and fat to prevent blood sugar spikes that produce energy lulls and concentration issues – two symptoms typified by ADHD.

Some prescription drugs can lead to minor brain atrophy, a condition that can cause a disturbance in cognition. Prescription medications may also interfere with brain function to cause mental and physical fatigue.

Children or adults with brain disorders that interfere with their sensory faculties may display symptoms of ADHD. Minor seizure disorders, if undiagnosed, can be mistaken for attention deficit disorder. While rare, these issues should be considered before jumping into a conventional ADHD care regimen.

Physical activity is good for body and mind and helps to release energy and tension. Exercise also increases oxygen intake and this stimulates brain activity. Research has proven that exercise, especially out in nature, can improve concentration and decrease common symptoms of ADHD. [14] [15]

Nobody knows your body or situation better than you. If you, or someone you know, is suffering from ADHD-like symptoms or even been diagnosed with ADHD, it may be worth digging deeper to determine if that's really the issue. After all, the mind medicines typically prescribed are... questionable, to say the very least.