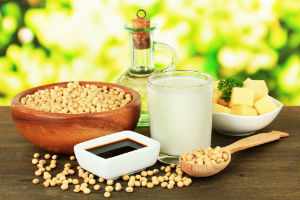 Soy, one of America’s favorite "health" foods, is not as benevolent as it is made out to be. One of the most successful maneuvers by the food and agricultural businesses in North America was marketing soy as a natural, health-promoting food. Even today, soy continues to retain a popular following among many individuals in the natural health community. The stark reality, however, is that soy is more of a poison than a nutritious food, with fermented soy being the exception. As it turns out, nearly everything we've been told about soy is untrue, including that it's a staple of Asian diets. Today’s soy has never been a staple in any diet except the diet that has been developed by modern agribusiness. As a common ingredient in many foods today, unfermented and non-organic soy is a disaster waiting to happen.

The History of Soy

How did soy become the darling of health foods? In North America, soy was a major product of the industrial revolution. Soy oil was used to provide lubrication to machinery; soy was a base ingredient for paint. After petroleum became the primary source of oil in the early 20th century, agribusiness farmers faced a major concern. In order to use the abundance of soy they had been growing for decades, they set about creating a massive public relations effort to convince the public, governmental agencies, nutritionists, and even scientists — that soy is not only food, but also a health food!

The Top Myths About Soy

Let's take a look at some of the health myths surrounding this popular, albeit potentially damaging, food.

The myth surrounding soy and bone health is derived from correlation studies showing that Asians have a low incidence of osteoporosis. Soy intake is assumed to be the reason behind the correlation, but when we delve a bit further into the facts we see that soy actually comprises a low percentage of the Asian diet. When soy is consumed in Asia, it is mostly in its fermented or minimally processed form. Asians tend to drink more green tea, consume more fermented and calcium-rich vegetables, and may even have a shorter hip axis length than Caucasians. [1] All of these factors are far more likely to contribute to Asia’s lower osteoporosis rates than the pseudo-miracle food that is soy.

2. Soy Formula is Good for Infants

Absolutely false! Soy contains trypsin, a compound that interferes with digestion and pancreatic function. [2] It is absent of cholesterol, which is critical for brain development and many other functions. [3] Research has shown that infants fed soy formula may experience a greater incidence of autoimmune disorders compared with infants that are breastfed. [4] If you need to feed formula to your baby, do not use one made from soy. The Israeli Ministry of Health, the German Institute of Risk Assessment, and the British Dietetic Association have all warned that infant formula made from soy puts both brain and body development at risk. [5]

3. Soy Is Good for the Environment

There is some truth to the claim that soy is good for the environment since farmers have long used soybeans to balance nitrogen levels in the soil. Unfortunately, nearly all of the soy grown today is genetically modified. Personally, I do not believe that playing with nature can be beneficial for the environment. Superweeds, anybody?

Goitrogens are substances that interfere with the thyroid's ability to utilize iodine, and soy is a prime source for these compounds. A reduced uptake of iodine results in thyroid impairment and that can affect your metabolism, mood, and energy levels. Soy also contains phytoestrogens, which mimic estrogen in the body and can disrupt your endocrine system and affect your hormones. The only time that phytoestrogens may be considered beneficial is during menopause.

How to Avoid Soy

Soy, like corn, is a building block in many, many processed foods – foods you wouldn't even think to contain soy. Unfortunately, you cannot simply rely on labels to clearly state if soy is present. Many ingredients contain soy in a variety of forms, often hidden underneath technical terminology. Common terms used to hide soy include:

Other unsuspecting ingredients include:

The best way to avoid soy, even organic soy, is to make sure your diet is as whole and raw as possible. Avoid processed foods, as these are a main source of soy. If dining out at a restaurant, ask if any of the food is made with soy.

Why is Fermented Soy the Exception?

Well, if it's GMO soy, it's not, but fermentation removes many of the harmful compounds of soy, including various nutritive inhibitors. The carbohydrates in tempeh that are responsible for gas and indigestion become easier to digest upon fermentation. [6] Phytic acid, a type of acid that aids in the absorption of valuable nutrients, is also produced during the soy fermentation process. These products include soy sauce, tempeh, natto (as in miso soup), and some soybean pastes. Natto, another fermented soy product, contains abundant amounts of vitamin K2, a nutrient responsible for calcium regulation and bone health. [7]