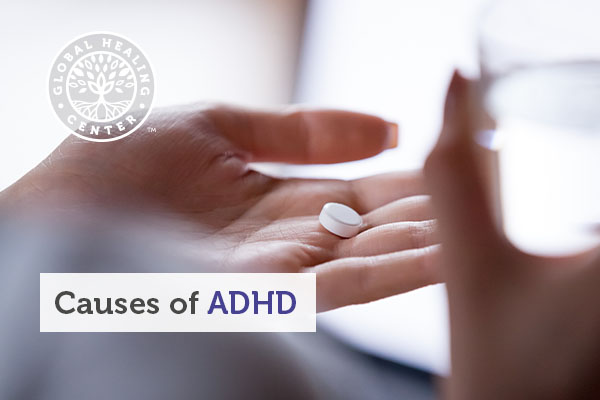 Attention Deficit Hyperactivity Disorder (ADHD) is on the rise, and the ‘disorder’ is now affecting many adults. [1] With such an influx of new diagnoses each day, many people might be wondering what is causing it. As with any disorder there is a likely contributor, or a multitude of contributors. While it could be any number of things, chemicals could be a very likely factor in ADHD diagnosis. Let me share these 6 toxic causes of ADHD with you, and you can decide for yourself.

Children and adults are being diagnosed with ADHD at a quickening rate. Know these 6 contributors and see if any of them ring true in your own diagnosis.

1. Acetaminophen Use During Pregnancy

A recent study suggests pregnant women might want to avoid acetaminophen. Children born to mothers who take the over-the-counter medication could have an increased risk of ADHD. [2] While the increase in risk is small — less than ten percent — is taking acetaminophen really worth it? [3]

Found in some plastic, BPA is a fairly well-known endocrine disruptor that so many manufacturers have turned to making BPA-free products. Studies suggest its substitute bisphenol-S, or BPS, could be just as bad for your health. One study looked at brain development after BPA/BPS exposure in zebrafish embryos and found a link to hyperactivity. [4] [5] While still very new, the findings suggest these chemicals could cause similar symptoms in humans.

Exposure to lead is bad news, as this toxic compound can cause poisoning. The highly toxic metal can affect anyone at any age, but young children are especially vulnerable: Lead has a devastating effect on the developing brain, sometimes causing long-term damage. [6] The developmental effects can be devastating, with low-level exposure linked to low IQs and ADHD in children. [7]

Many pregnant women tend to cut fish out of their diet completely in order to avoid mercury exposure. Like lead, mercury is a neurotoxin that should be avoided, but don’t give fish the boot just yet. While mercury could be linked to a higher risk of ADHD symptoms in children, eating more fish could possibly lower that same risk. [8] It’s all about balance and finding fish that carry a low mercury burden.

One study suggests prenatal exposure to air pollution can increase the risk for ADHD in kids. [9] Polycyclic aromatic hydrocarbons (PAHs) are emitted by burning fossil fuels, so completely avoiding them can be quite difficult. But limiting your exposure could be the answer since “children born to mothers with higher levels of PAH during pregnancy had five-fold increased odds of showing symptoms of ADHD than those who were born to mothers with lower levels.”

For some children with ADHD, switching to foods without artificial coloring has helped manage symptoms, leading some researchers to believe there could be a link. [10] Unfortunately, products in the U.S. are not required to have a disclaimer connecting attention concerns in children and dye consumption; however, some companies are shaping up when it comes to dyes. Kraft has already moved forward to get rid of yellow dyes from some of its character-shaped macaroni-and-cheese products in Europe and the U.S. [11]

What Other Factors Contribute to ADHD?

There are some that just think our kids are too restrained, that ADHD is just a by-product of our generation. That’s something I’ll address in another entry, so be on the lookout! Toxic foods and ingredients like fluoride have definitely been implicated in ADHD symptoms, so it is best to go all natural or organic when trying to manage hyperactivity and poor focus. Doing something active that is also enjoyable could also be a great way to manage overactive energy levels and support concentration.