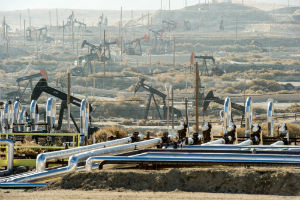 Hydraulic fracturing, or fracking, is an ugly process that drives highly-pressurized chemicals, water, and sand into underground rock. Usually looking for oil or natural gas, fracking operations leave their stain on the environment, but the human price might even be higher. Think of it this way: imagine dropping a couple of tablespoons of red dye into an Olympic-sized pool. Now instead of dye, think about a common fracking mixture: a cocktail of benzene, toluene, and xylene. Do you want to be exposed to this stuff?

Fracking Fact You Should Know

A recent study suggests of the 750-plus chemicals used in fracking, over 130 are endocrine disruptors. [1] Once in the body, these toxins have been linked to fertility issues in men and women as well as birth defects. Pregnant women are also at risk according to the report, linking toxic metal exposure to an increased risk of stillbirths and miscarriages.

2. Fracking May Be a Greater Threat Than Thalidomide or Asbestos

Fracking has become a trend in the drilling industry, and a new report from the UK worries it’s been adopted too quickly without a full investigation into its damaging effects. [2] The study compares it to our superfluous use of asbestos and thalidomide in the past, indicating that fracking may be the next big health threat facing our world.

3. Fracking Chemicals May Cause Cancer

A new study suggests that the closer you live to a fracking site, the greater your risk for major health concerns, like cancer, further down the line. Cancer-causing poisons like benzene and formaldehyde were found at dangerously high levels near operations in five states. [3] In the short-term, residents are developing conditions like asthma, ringing ears, or nose polyps — things that weren’t an issue before.

With all the chemicals used, fracking and pollution go hand in hand. One group of researchers has discovered a method for effectively locating drilling chemicals in the water supply, even at water treatment plants. [4] The chemicals have typically been difficult to trace. While this isn’t exactly a boon for the environmental community, this information could help track water pollution. This is good news since, in 2005, Congress exempted fracking from some requirements of the Safe Drinking Water Act, a decision health advocates have taken to calling the “Halliburton Loophole.” [5]

5. Fracking is Affecting More Than Our Health

Fracking not only targets our health, it could also have lasting effects on our rights. So fed up with the effects of fracking on his property, Steve Lipsky of Parker County, Texas, took to the Internet and media. [6] He claimed his water supply became so polluted by methane, it had become flammable — and even had videos and photos of his water burning to prove it. In 2011, the company responsible for the fracking operation sued him; the company claimed Lipsky tarnished its reputation for environmental stewardship.

6. The Energy Companies Don’t Want You to Know What Chemicals They Use

Energy companies tend to get angry when you talk about their shortcomings (read: lawsuits), but they really don’t even want you to know what goes into fracking operations. Recently, these companies have told the EPA they shouldn’t have to disclose fracking information. [7] There’s also a lot out there trying to lessen the danger of these toxins. A recent report even suggested chemicals used are no more dangerous than additives in your toothpaste. [8]

7. Even if No Chemicals Were Used, Fracking Isn’t Harmless

Fracking takes a huge toll on our natural resources. Even if you were to completely remove the chemical element, the fracking industry uses a ton of one of our most precious resources: our water. Take Ohio, for example. The state saw drilling operations use 4 billion gallons of water since 2011. [9]

Something to Think About