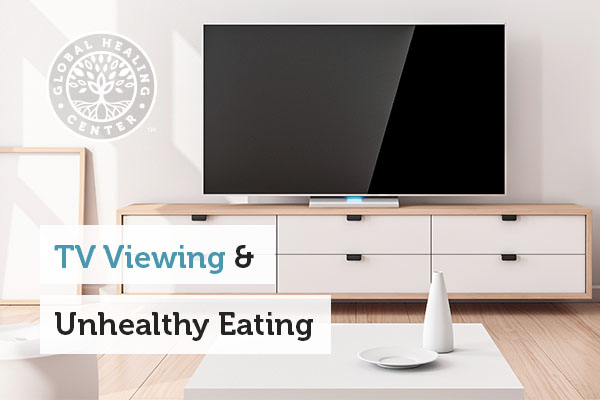 There’s an old adage that says TV rots your brain. While this may not be literally true, there are ways it can contribute to the spoiling of your health. A newly published meta-study carried out by researchers at Loughborough University’s School of Sport, Exercise and Health (SSEHS), in England, has underscored potential health hazards of spending too much time in front of the tube.

Data was collected from 53 separate international studies which focused on sedentary behavior as it relates to dietary and television viewing habits. A strong association was found between watching large amounts of television and increased intake of nutritionally poor foods such as high-calorie snacks, fast food, and soda. A reduction in fruit and vegetable consumption among avid TV viewers was also identified.

According to Dr. Natalie Biddle, lead author of the investigation, the negative influence television has may stem from some combination of interrelated factors. Constant bombardment of commercial advertisements during segment breaks and even within actual programming can encourage unhealthy food-related decisions. When this influence is combined with regular exposure to short bursts of highly targeted audio and visual stimulation, it has a very real effect on the viewer’s attention span and can impact their ability to make informed decisions properly.

Normal activities associated with TV viewing, like channel-surfing and “TiVoing”, also reward impulsive behavior. When viewers see a food advertised, there’s a good chance they’re going to want it, even if they aren’t really hungry. If that food isn’t readily available, they may lose interest and return to their seat empty handed... or they might just grab the next best thing sitting around the kitchen instead, and it may be less than nutritionally ideal.

Not only does habitually staring at the TV generally lead to increased snacking and poor diet practices, the sedentary nature of watching TV also takes a hefty toll on viewer health and physical appearance.

The easiest way to avoid these, and other, health risks connected with excessive TV viewing is to simply watch less television. Even without taking the recent Loughborough University findings into consideration, limiting TV time to a maximum of three or four hours a week is still a smart idea. Cutting back on television may result in having a lot of newly available free time to pick up new hobbies. And, spending the extra time hanging out with friends and family or using it to catch up on your reading will feel far more rewarding.