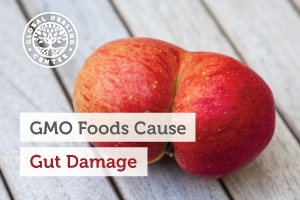 Consumer concerns regarding pesticide contamination of commonly-consumed crops, like corn and wheat, have been voiced for decades. This, along with the rising issue of pesticide resistance of many common agricultural pests, has led scientists to develop genetically-altered crops that produce their own insecticides. These genetically-modified organisms, or GMOs, come with side effects that cause more concerns than solutions.

To understand the connection between GMOs and gut health, you must understand what‘s being done to a large percentage of the GMOs in the food supply. Scientists genetically engineer food crops to resist the effects of caustic pesticides. Because the crop in question is immune to the pesticide it’s designed to be used in conjunction with, food producers can more thoroughly saturate the crops to kill invasive bugs and weeds. The result is that GMOs are more likely to have greater pesticide residue.

Genetically-modified organisms are materials (usually of plant origin) that have been altered to ward off pests and disease. While this sounds beneficial in theory, the health effects of GMOs remain unclear. Some animal models have shown disastrous effects from feeding GMO foods, with soybeans, corn, and wheat producing the worst effects. Clinical studies have shown they affect immune system health and reproductive health the worst.[1, 2]

For years, developers of genetically modified crops have claimed that the pesticides in plants were harmless to the human body. It was said that pesticides were broken down into inert compounds as soon as they entered the stomach. With no large-scale, long-term studies available to back up these assertions, there’s no guarantee of safety. Findings presented by the University of Sherbrooke Hospital Centre in Quebec revealed concerns over the long-term risks of consuming GMO grains, like wheat and corn. The study involved a small population of expectant mothers and their unborn children as well as non-pregnant women. Its aim was to test the amount of residual pesticides that could be found in the mothers' blood. Of the 69 women who participated in the study, the majority of mothers had measurable amounts of pesticides in their bloodstreams. Even 80% of their fetal offspring showed noticeable serum levels of genetically engineered pesticides.[3]

Gastrointestinal disorders have been on the rise for the past 50 years, and gluten, processed foods, and GMOs are driving it. Irritable bowel syndrome, Celiac disease, and chronic constipation are a few of the many intestinal disorders that are commonplace today. Glyphosate, an herbicide used in GM crops, has been shown to disturb intestinal microflora balance and promote the growth of harmful bacterial strains.[4] This may interfere with the immune system, increase infection rates, and affect mood and behavior.[5]

Digestive enzymes may be reduced following consumption of GMO foods, leading to impaired digestion.[6] Studies also indicate that GMO crops, particularly those that contain glyphosate and Bt toxin, damage microvilli in the intestinal tract similar to Celiac disease.[7] Research is unclear whether or not this could be contributing to the rise of Celiac disease; however, it could be a factor.

How to Avoid GMO Foods

The only way to avoid GMO foods is to choose organic food. By purchasing organic, you’re not only avoiding GMO foods, but you are also voting with your pocketbook and creating a demand for more natural, non-GMO, non-pesticide foods. Don't be fooled by the all-natural label; these foods may contain all-natural ingredients, but they could be genetically modified. Only the USDA's organic certification label guarantees the absence of genetically engineered ingredients.

How to Be Proactive About Your Gut Health

It is difficult to completely avoid GMO foods since they are everywhere. But, there are other ways to counteract the toxic load that comes with GMOs such as cleansing and supplementing. Periodic cleansing can help you maintain a healthy gut while eliminating toxins. Taking an enzyme supplement to enhance your efforts.